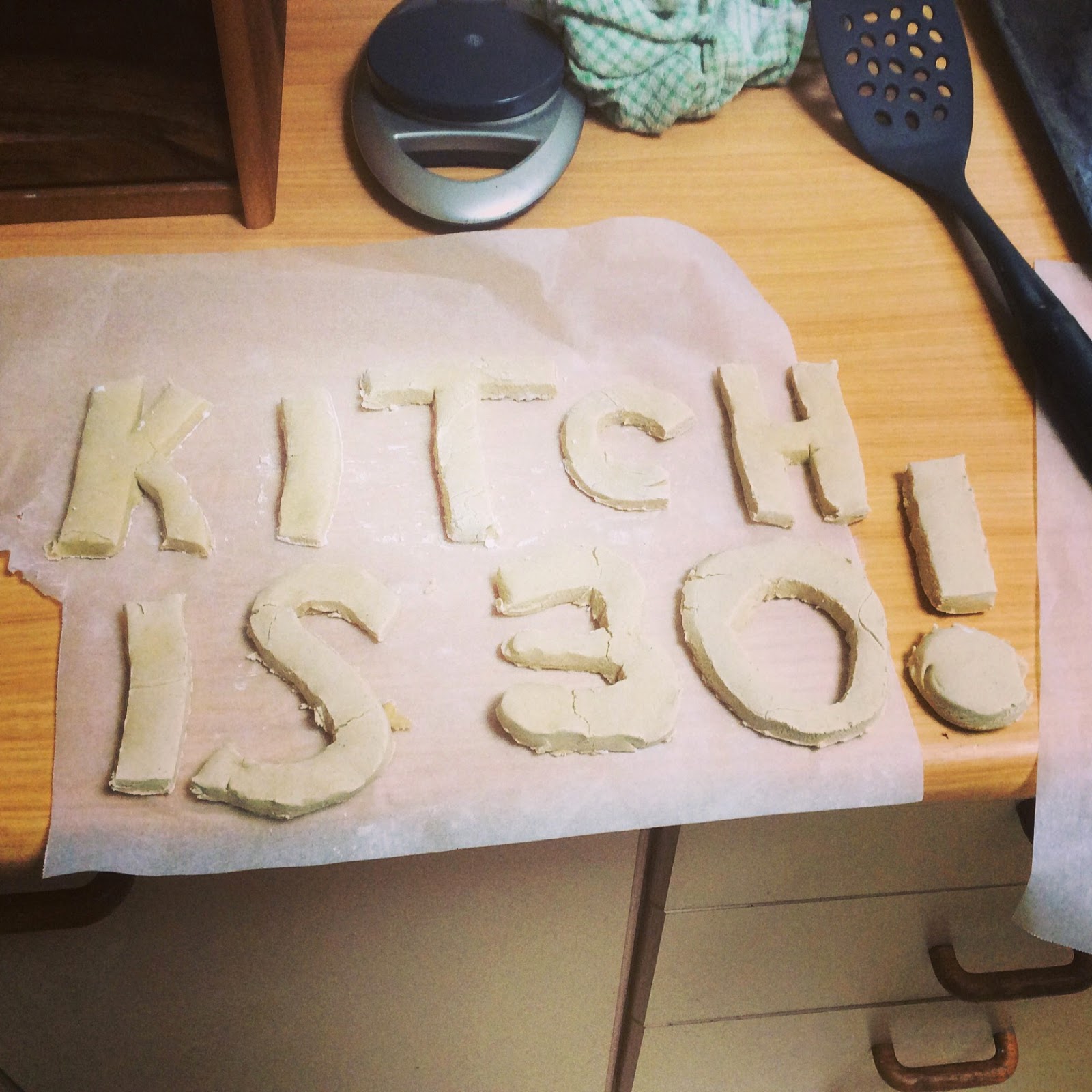 It was my mates birthday yesterday, and he loves sugar. I will never forget one year, we were camping together, and for breakfast our parents had cooked up a storm. Bacon, sausage, egg, beans, toast, avocado.. We all ate our fill, and decided to drive off our belly's by heading in to town. Half an hour later, my mate was at the local bakery, ordering THREE jam filled doughnuts AND a milkshake.

So it was his birthday, a 30th no less, what to get him? Easy. I've been desperate to add to my Sourdough recipe arsenal, and this was the perfect opportunity to road test my Gluten Free Sourdough Doughnuts Recipe!

Now.. There isn't a single recipe matching this description on Google. Normally, I would present you with a recipe and add a personal twist to it. Not so here, because no-one else has tackled this apparently important task. Sure, there are sourdough doughnuts. But they aren't gluten free. And there are gluten free doughnuts. But they use yeast. This recipe will allow you to use up that yummy sourdough starter you have fermenting away on your kitchen counter, hopefully influenced by my own recipe here. Yep, this is brought to you by my own Martin The Morose.

Now, a lot of GF recipes treat kneading like smoking. It's OK to do it once a year, but for everything else, don't overwork that dough. So, blindly I waded in to battle with a rough recipe that called for a nice, standard GF dough, i.e. very wet. Ha! Yeah right. Try cutting doughnut shapes out of oatmeal and you'll understand just why doughnut dough needs to be kneaded. Half an hour in to my task I literally had dough gloves on.. In fact, check out my work space: 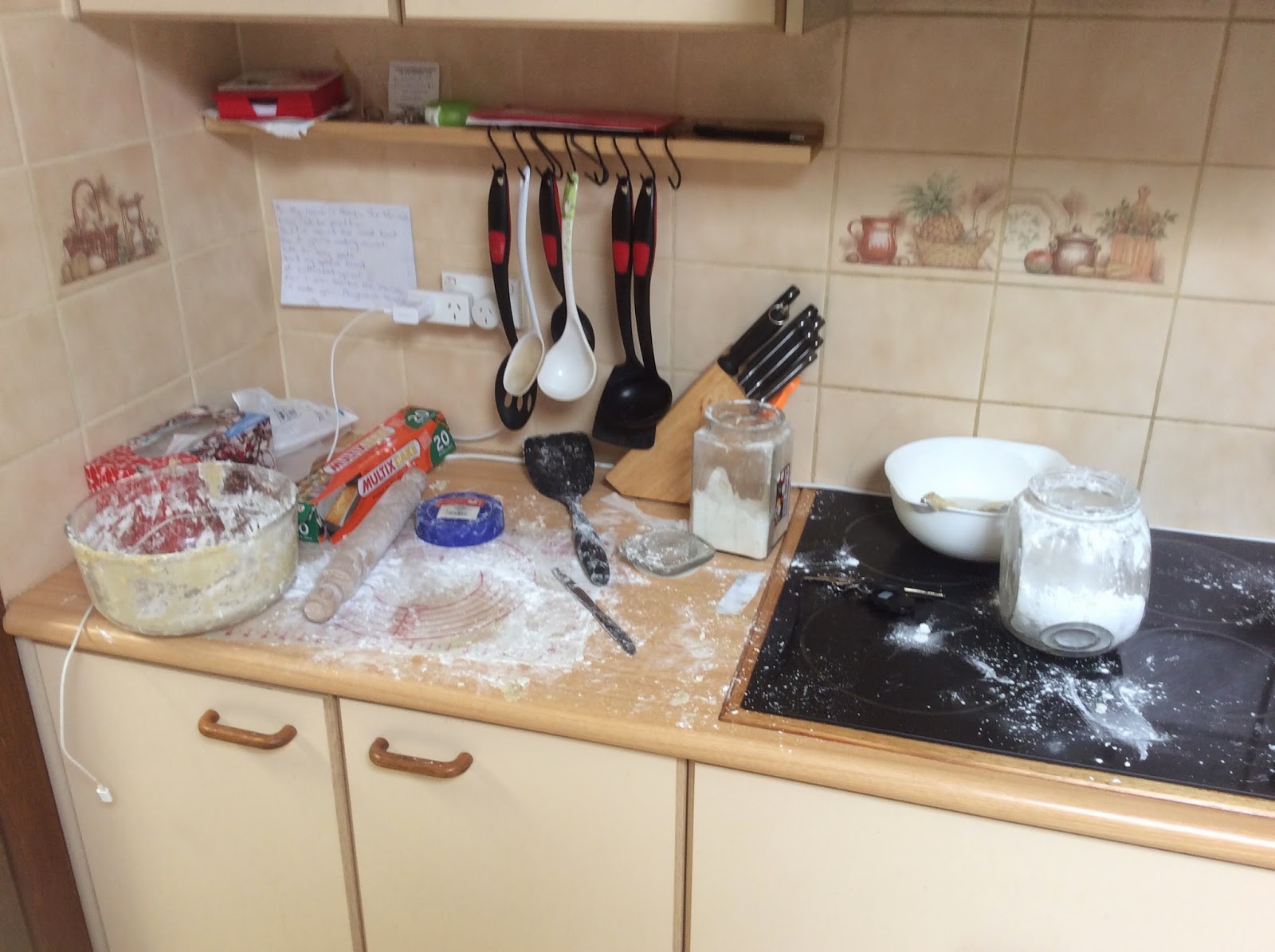 Trust me. When I took this photo, my iPad looked like a square piece of dough. So I had to tweak. Clearly, the usual gluten free method was not going to work. So I added flour. And more flour. And more. Then I had lunch, then I added some more..

I must add, this is not my first foray in to the doughnut world. I have made many a batch, ranging from the light and airy to the frisbee variety. This was my first Sourdough batch however, and they turned out a treat!

A note or two. Firstly, on the glaze. You can glaze it with whatever you wish! I used some frozen Butter Cream I had left over from my Gluten Free Pinata Cake. If you want to go for the whole Krispy Kreme experience, this will help, and Google can instruct you on the rest. This will produce a nice unglazed doughnut you can decorate however you wish!  The Sourdough will act as your yeast, so think of these as Yeast Risen Doughnuts.

Also, for the oil, I used Peanut, but that's because I had it handy. I wouldn't recommend it, because some have allergies, so use Vegetable or your preferred frying oil. Make sure it's 350 Degrees Farenheit, or 175 Celisus before you dip your dough in. 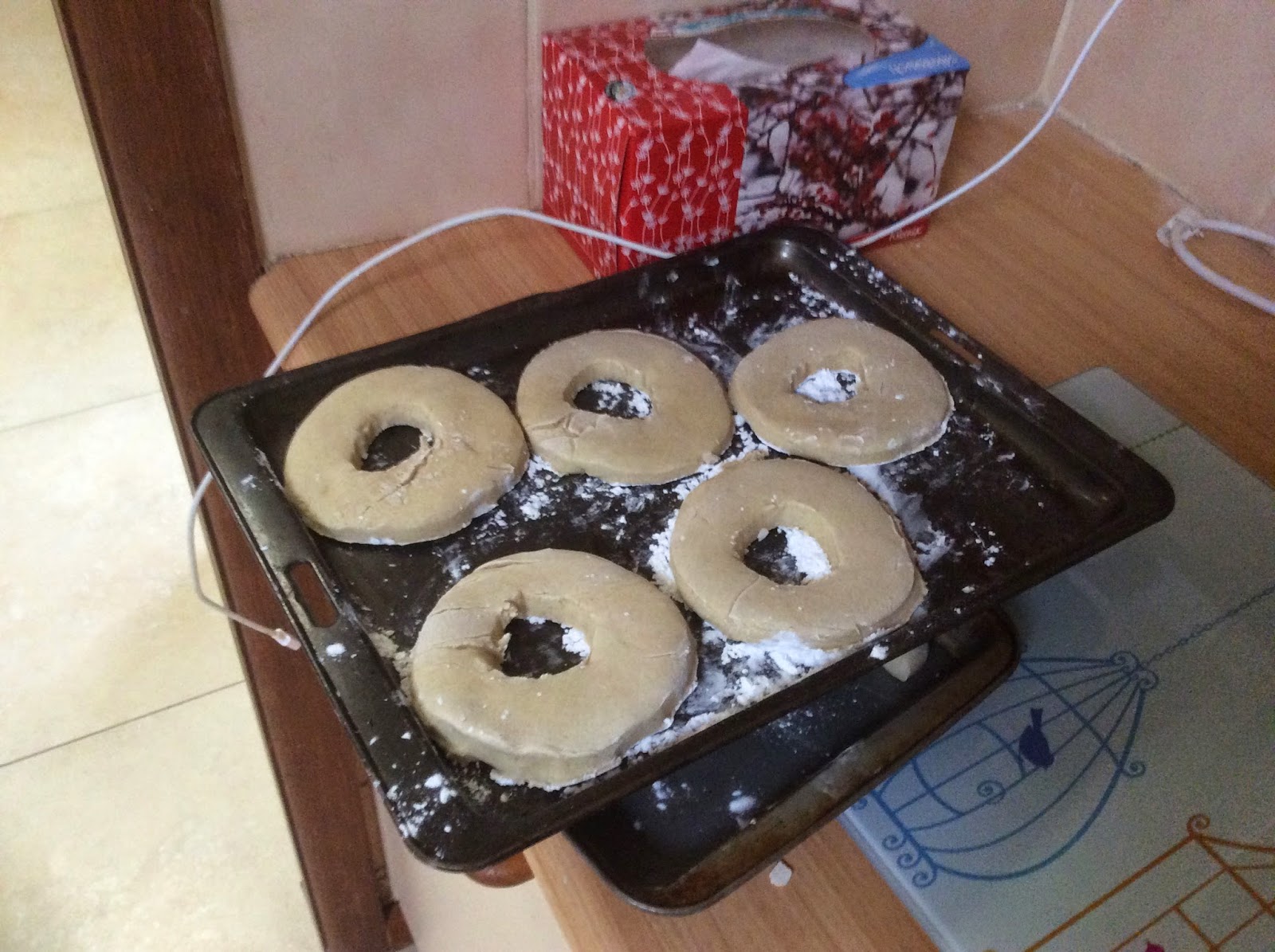 Method:
1. Combine all of the Dry Ingredients in a bowl, and either whisk them until totally combined, or using a stand mixer, mix until combined.

2. Combine the Milk and the Butter in a pot over medium heat. Stir until butter is melted, and milk is starting to simmer. Remove from heat, and allow to cool (cool enough you can stick your finger in it)

3. Whisk the eggs until bubbles appear. Add them to the dough, along with the Vinegar and Milk and Butter mixture. If you're using a stand mixer, mix until completely combined, and the dough comes together well enough to handle (fit your dough hook or paddle attachment for this task, and use a spatula to scrape the sides. Mix on medium setting).

4. Now you use your cooking instinct. Flour a hard surface and turn the dough out on to it. Start kneading. You want a dough that is a joy to work with. If it is sticky, add more flour. If it is crumbly, add more water. Work the dough like you would for a pizza. I broke my dough ball in to two pieces and kneaded them separately, until they were very smooth and easy to roll out. If your dough is becoming too hot, pop it in the fridge for 15 minutes to harden up.

5. Break your dough ball in to 4 portions. Place a portion on your floured surface, dust lightly with more flour, and roll out to 1 inch thickness.

6. Use a cookie cutter, a doughnut cutter, or anything round, and cut the dough in to a round shape, as big or as small as you like. Use your knife and cut a circle out of the middle. Gather the scraps and re-roll them. Continue this until you've used all the dough.

7. Place your doughnuts on a baking tray lined with baking paper and dusted with flour. Cover with plastic wrap, and place in a warm place to rise for 1 - 2 hours. Sourdough will rise slower than traditional yeast. When they are 1.5 times their original size they are ready to rock!

8. Pour the oil in to a pot so it extends about 2 inches up the side. Place it on medium-high heat, and heat until 350 degrees F, 175 degrees C, or until it is hot enough that when you drop a bit of extra dough or bread in, it browns up immediately.

10. When they are done, remove them with a slotted spoon and allow to cool and dry on a rack adorned with paper towel.

11. Allow to cool entirely before you attempt to glaze, otherwise you will ruin your glaze and get sticky sugar all over you! 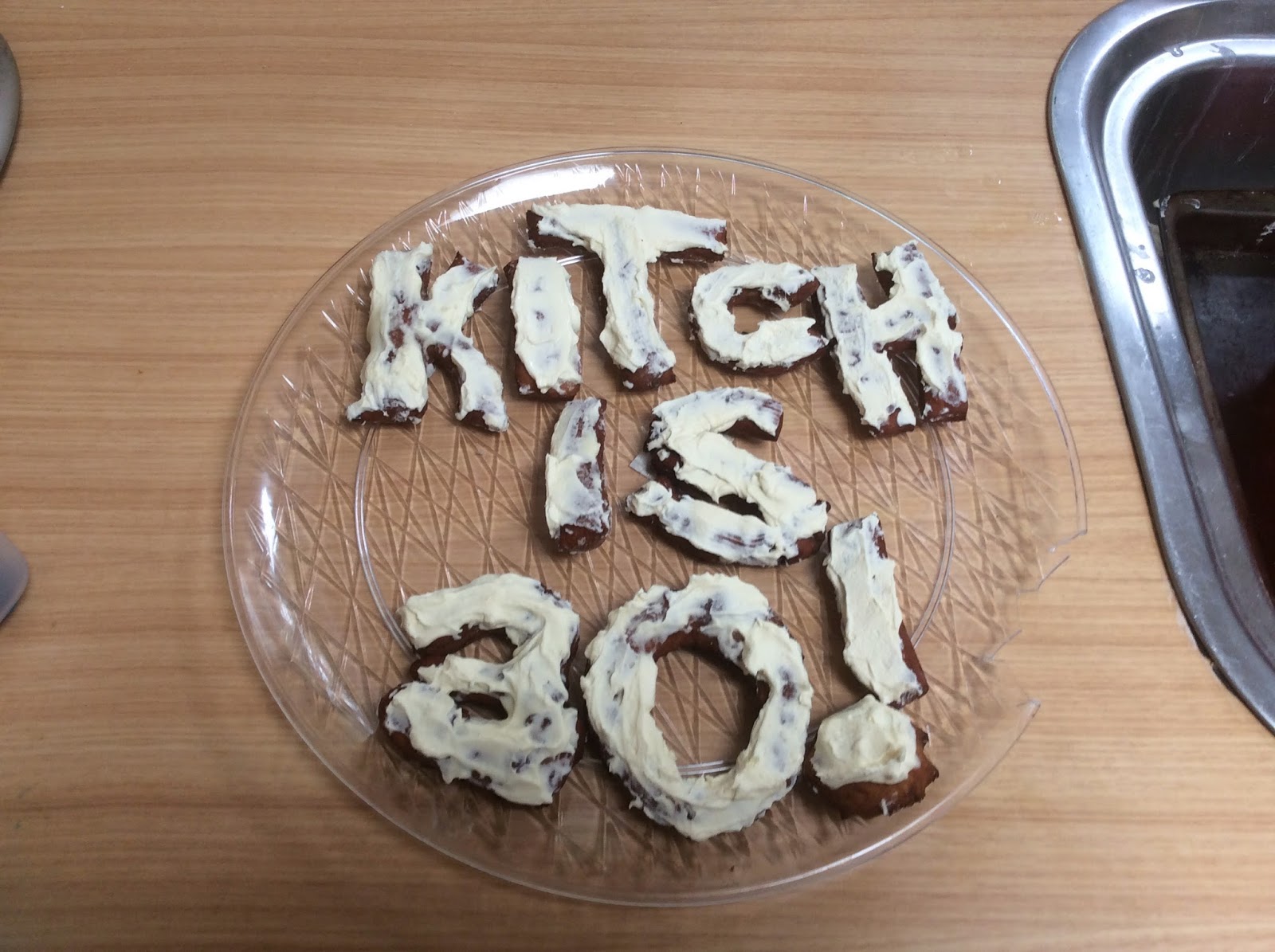 As you can see, I attempted to glaze before my Doughnuts had totally cooled.. Also, my handwriting (or dough carving) is quite poor. But you can carve out any shape you wish with this dough. (And for the record, who cares what they look like? Wikipedia has this picture of a Doughnut and it ain't pretty)

That is why I added so much flour, and made it knead-able. You need to have fun with a Doughnut! And the beauty is that even if they don't taste so good, no-one will care anyway, because they would've instagrammed them already and gotten 40 likes within minutes, so everyone feels rewarded regardles!!

PS These taste awesome. I wouldn't present them to you if they didn't!
at January 03, 2015
Email ThisBlogThis!Share to TwitterShare to FacebookShare to Pinterest
Newer Posts Older Posts Home
Subscribe to: Posts (Atom)