By The Numbers: The Most Successful Hip-Hop Soundtracks of All Time

It's unclear where Black Panther will ultimately end up on the all-time list of most successful hip-hop soundtracks, but hopefully it sparks a trend where albums similar to the Straight Outta Compton soundtrack and the music from Dope can find more mainstream exposure and success.

The genre doesn't seem to propagate album sales, though there have been some high-selling examples throughout the years. 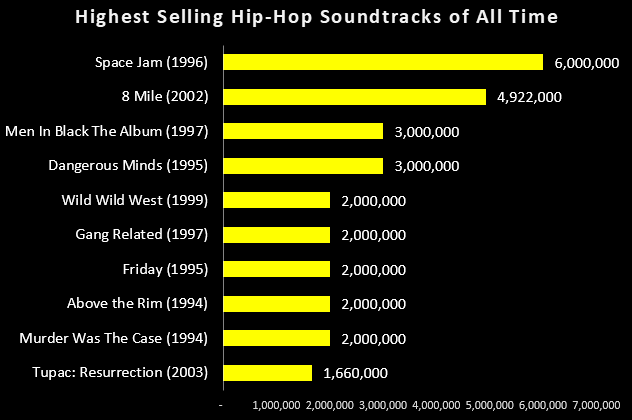 8 out of the top 10 were released in the 1990s. Eminem's 8 Mile came at the peak of his career, and he still didn't manage to out-sell Space Jam. Not only did that soundtrack feature some true heavy-hitters (Jay-Z, R. Kelly, Biz Markie, D'Angelo, Butsa, LL etc), the movie was highly popular, taking in $230 million at the box office.

Eminem's 8 Mile featured even more stars, and it earned Em an Academy Award for "Lose Yourself". It underperformed for Eminem though. 4.9 million sales was lightweight compared to the Diamond albums he'd release either side of it (The Eminem Show and The Marshall Mathers LP). This soundtrack did go on to sell 11 million copies worldwide.

Men In Black is the highest grossing film in this top 10. On a similar budget to the two above it, it posted $589 million at the box office.

Murder Was The Case by Snoop Dogg is the shortest film on this list, released by Snoop and Dre and in a similar vein to what Roc-A-Fella Records would do in 1998 with Streets Is Watching.

The top 10 list is a good mix of genuine movies (8 Mile, Men In Black, Friday) and rapper-related releases (Murder Was The Case, Tupac: Resurrection). It shows the star power that rappers held during this period, that their own movie soundtracks, which took in significantly less at the box office than top-tier releases like Men In Black, were still capable of selling and charting just as well as the soundtracks from movies with $50 million+ budgets. Hollywood picked up on this quickly, and rappers like Tupac, Snoop Dogg, DMX, Nas, Ice Cube, LL Cool J and Eminem all began to pick up starring roles. 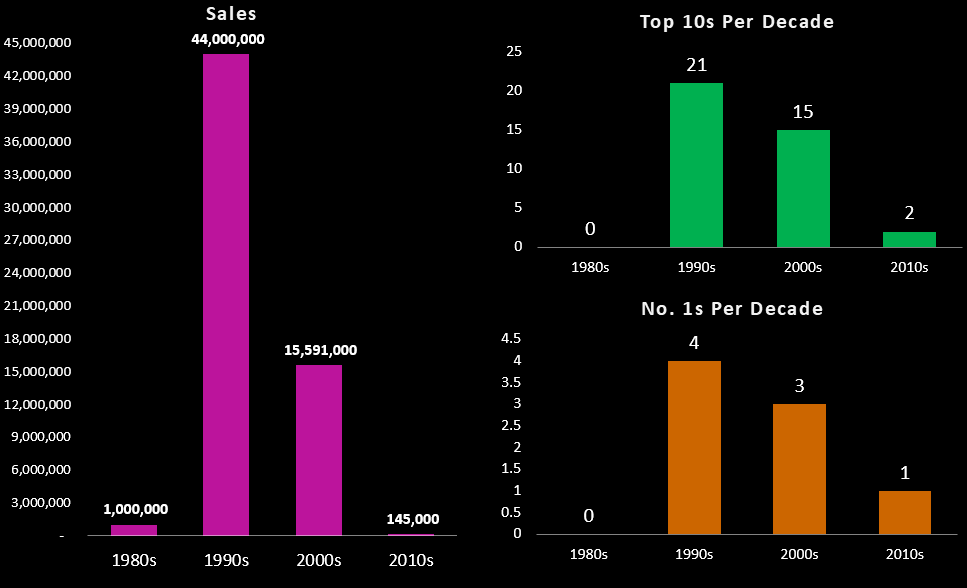 The 90s are so far ahead in this graph. In the 1980s hip-hop was beginning to experience almost unbound mainstream success. The Beastie Boys, Public Enemy, LL Cool J and N.W.A. were beginning to sell heavily (License to Ill is certified Diamond) through a variety of sounds and themes. They helped build the platform, and artists such as Rakim and Big Daddy Kane convinced their audience that rappers had big enough personas to appear in movies.

This followed the same pattern that rock music tracked during the 60s and 70s. The Beatles began experimenting by starring in their own films, The Who created Tommy and were working on rock opera's, and Charlie is My Darling featuring The Rolling Stones was designed to test if there was an audience for rock stars to transition from music to film. 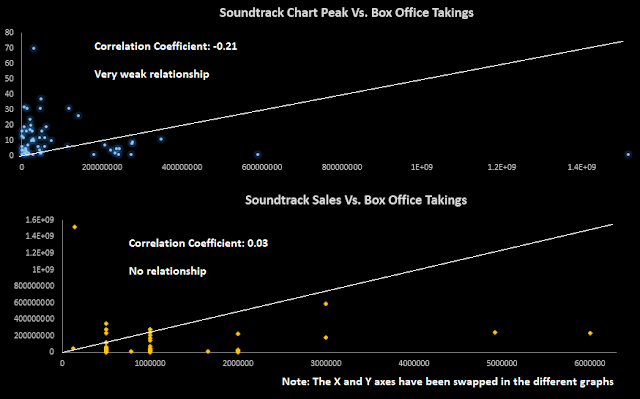 There is no correlation between movie soundtrack sales and box office takings. This means that the success of a hip-hop movie soundtrack is not dependent on the popularity of the movie it's soundtracking. Examples include The Show from 1995, which went platinum and peaked at number 4 on the Billboard 200, but the movie only took in 2,000,000 at the box office, a miniscule amount compared to the rest of the datat set. Tupac: Resurrection sold 1.66 million and made it to number 2, but the movie only took in 7.8 million.

What Does This Mean for Black Panther?

Reports by Billboard say the Black Panther soundtrack will land at number 1, and sell 150,000 copies in its first week. The movie releases tomorrow in the U.S., and it has a budget of $200 million. Based on the dataset and the analysis, the success of the movie will do little to impact the sales and chart performance of the soundtrack, but there are other factors at play.

Kendrick has been heavily involved with the project, and over the past 6 years he's spent 34 weeks in the Billboard 200 top 10, 29 in the top 5, and 7 at number one. He's become a Billboard veteran in a very short time, and projects with his name attached usually chart and sell well.

Regardless of how well it performs, it's an impressive and highly enjoyable body of work. Putting Kendrick, Sounwave and Top Dawg in a room together almost guarantees success, and this is Kendrick's most varied sonic project. His vast knowledge of what currently works in a hip-hop album combines with his even larger technical ability to create an album that feels current, hard-edged and lyrically accomplished all at once.


Note: A soundtrack is deemed hip-hop if the majority of the songs (usually 60% or over) are provided by rappers or feature rappers.
at February 15, 2018
Email ThisBlogThis!Share to TwitterShare to FacebookShare to Pinterest
Newer Post Older Post Home