While the overt and enduring legacy of Chappelle's Show will be the way it uncovered and exposed systemic racism and oppression still faced by black people and other minorities in modern America post-2000, the show's impact on the musical careers of some of hip-hop's brightest stars deserves more than a passing mention. Dave was a fan of hip-hop, and his business partner Corey Smyth told Noisey they initially wanted to acts to perform a b-side, or a track that the artist's label wouldn't support, but that the artist felt strongly about. When this was rejected by Comedy Central, Dave said "let's just book our friends", and thanks to Dave's immersion in the burgeoning alternative rap scene during the late 90s and early 2000s, the show ended up securing some of the most eclectic and essential rap artists from the time.

Musical guests were featured at the end of each episode of the first two seasons, and considering the healthy ratings these first two seasons enjoyed, and the rapid rate at which the DVDs sold (the second season was the fastest selling TV on DVD of all time, moving 1.2 million units in 7 days), any artist appearing on the show could count on valuable exposure to a large and relevant audience.

Lil Jon saw the biggest spike in sales per album after he was featured on the show in February 2004. In Episode 4, Season 2, Chappelle had two skits in which he impersonated the rapper. Lil Jon would appear playing himself in episode 5 during a phone call with Chappelle, who was also playing Lil Jon. The rapper’s fourth album, Crunk Juice, dropped the following November, peaking at number 3 on the Billboard 200, and selling 2,000,000 copies, significantly more than his previous two records.

Busta Rhymes, Common and Lil Jon all experienced a spike of over 20 places in their average Billboard 200 album chart position post-Chappelle’s Show, while Fat Joe, Anthony Hamilton and Talib Kweli all jumped more than 12 places.

Common, Fat Joe, Busta Rhymes were already established artists, all having released 5 or more albums prior to their appearance on the show. This mid-career injection of mainstream popularity could in part be attributed to the show, and Lil Jon credits the show with his rise up the charts, telling MTV in 2004:

“This Dave Chappelle sh-- just really put me on a different level. He basically has thrusted me into pop culture, and not just urban but white society as well.”

Singles released 3 years before an appearance on the show and 3 years after the appearance are
included. This is the change in the average Billboard Hot 100 chart position before and after
the episode airs. 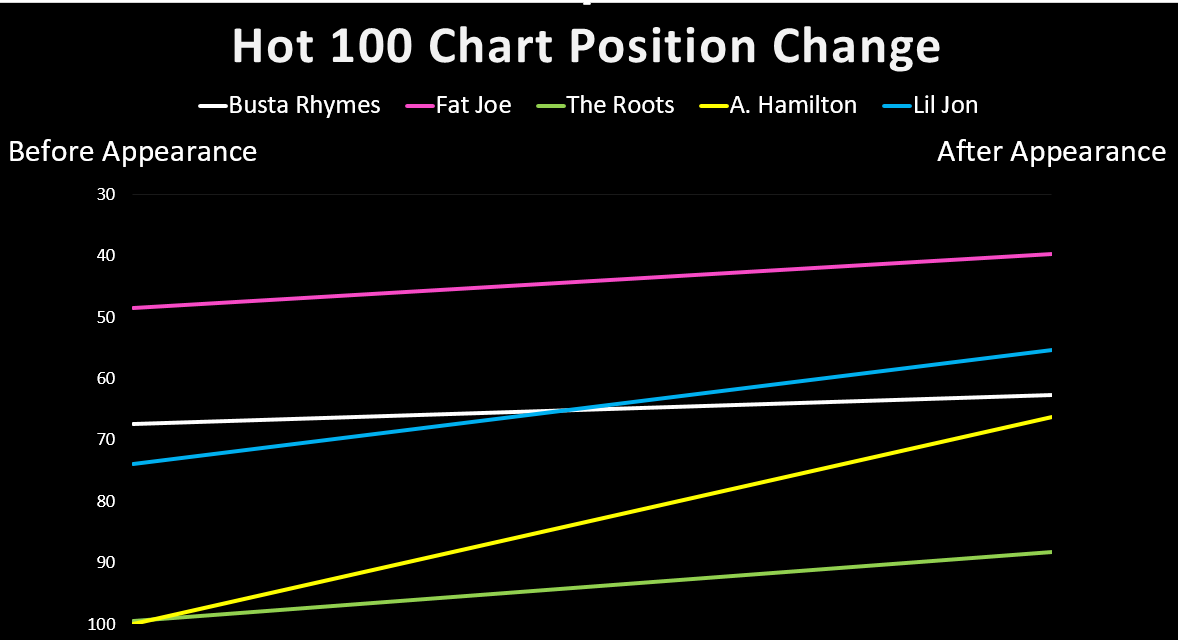 Anthony Hamilton’s February 2004 appearance on the show spawned the highest chart climb of the data set. In the 3 years after his episode aired, his singles were charting nearly 34 places higher on average than before.

Lil Jon’s singles chart performance rose nearly 20 places, and it must be noted that his guest place on “Yeah” by Usher was not included, as Lil Jon wasn’t the primary artist.

Kanye appeared alongside Common on March 3, 2004, to perform their collaboration “The Food”. The final product was so good, Common included the live recording on his album Be in place of the studio version. Kanye appeared on camera wearing a backpack, bringing the style and look that he debuted on the single cover for “Through The Wire” to mainstream media, and beginning his “backpack rap” era. The term pre-dates Kanye’s success, used as a catch-all for conscious, underground hip-hop, but West’s association with the phrase brought the idea of backpack rap into the collective consciousness of the commercial market. His two previous videos, “Through The Wire” and “Slow Jamz”, featured traditional baggy hip-hop clothing.

Kanye’s appearance coincides with a huge spike in Google searches for “backpack rap” in 2004:

Prior to the airing of the episode in March 2004, the amount of searches were zero. The spike comes directly after Kanye and Common’s appearance on the show.

The word “backpack” also experienced a healthy increase in usage in rap lyrics after this appearance. 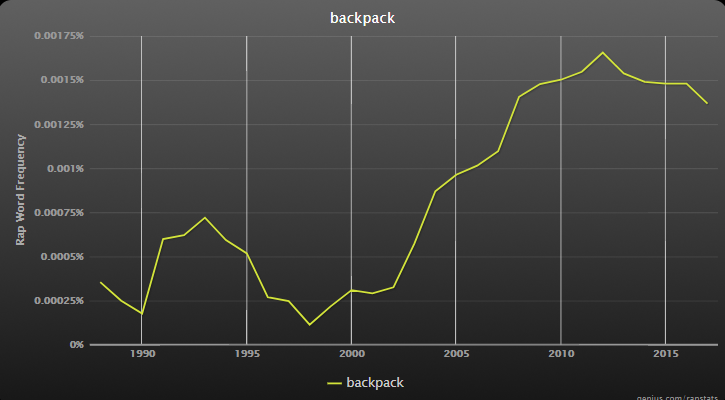 The statistics show that this performance helped the previously underground "conscious" rap classification move into
the mainstream. 3 years later, Kanye would defeat 50 Cent in a first-week sales battle concerning their respectic third
solo LPs. 50 Cent's loss signalled the end of the commercial success of gangster rap, ushering in a new era of hip-hop,
where artists like Lupe Fiasco and Kid Cudi would flourish with more introspective content.

This blog has previously uncovered the impact Dave has had on the lyrical content of rap. That article is here.