By The Numbers: "Untouchable" Is More Political Than Any Prior Eminem Album

When Eminem took aim at Donald Trump during his October 2017 BET Cypher, opinion pieces sprung up, fans reacted on Twitter in their droves, and speculation about the subject matter of his new album was leaning towards a fired-up, pissed off Eminem/Marshall Mathers/Slim Shady that would lyrically destroy Trump and anyone else he felt was deserving on a grand scale.

And with "Untouchable" dropping a week before the record, Eminem ensured that Revival would be his most political album of all time. That song featured 133 political lines, compared to 104 on the entirety of Encore, and just 13 on his previous album, Marshall Mathers LP2.

However, apart from "Like Home", he barely touched on political or social matters on the rest of the record. While some fans were hoping for a reprise of tracks like "Mosh" or "White America", they were treated instead to huge pop tracks and goofy punchlines.

Compared to its contemporaries just how political was Revival?

This analysis counts the number of line in each song, then the total number of those lines that are devoted to a political or social message. This gives each song, and thus each album, a "political percentage".

These are the mainstream records from 2016 and 2017 that have featured the highest percentage of political content. Much of the narrative surrounding Revival was devoted to speculation he might create his own version of Jay's 4:44, a mature look at the social and political landscape in North America in 2017. Both Jay and Eminem are at similar points in their career: mid-to-late 40s, 20+ years since their first albums, unmatched commercial success. And with "Untouchable", the BET Cypher, and 2016's "Campaign Speech", it felt like Eminem might use his frustration at Trump and those associated with him to create a scorching political record.

It didn't happen, and while Logic sits below Eminem on this list, that's thanks to the rambling outros he added to most of his tracks on Everybody, pushing up the number of lines per song, thus reducing that political percentage.

Should we be surprised at Eminem's lack of political content?

Only songs on the standard edition of an album are counted, so "We As Americans" isn't included, just as tracks like "Don't Front" or "Elevator" aren't. 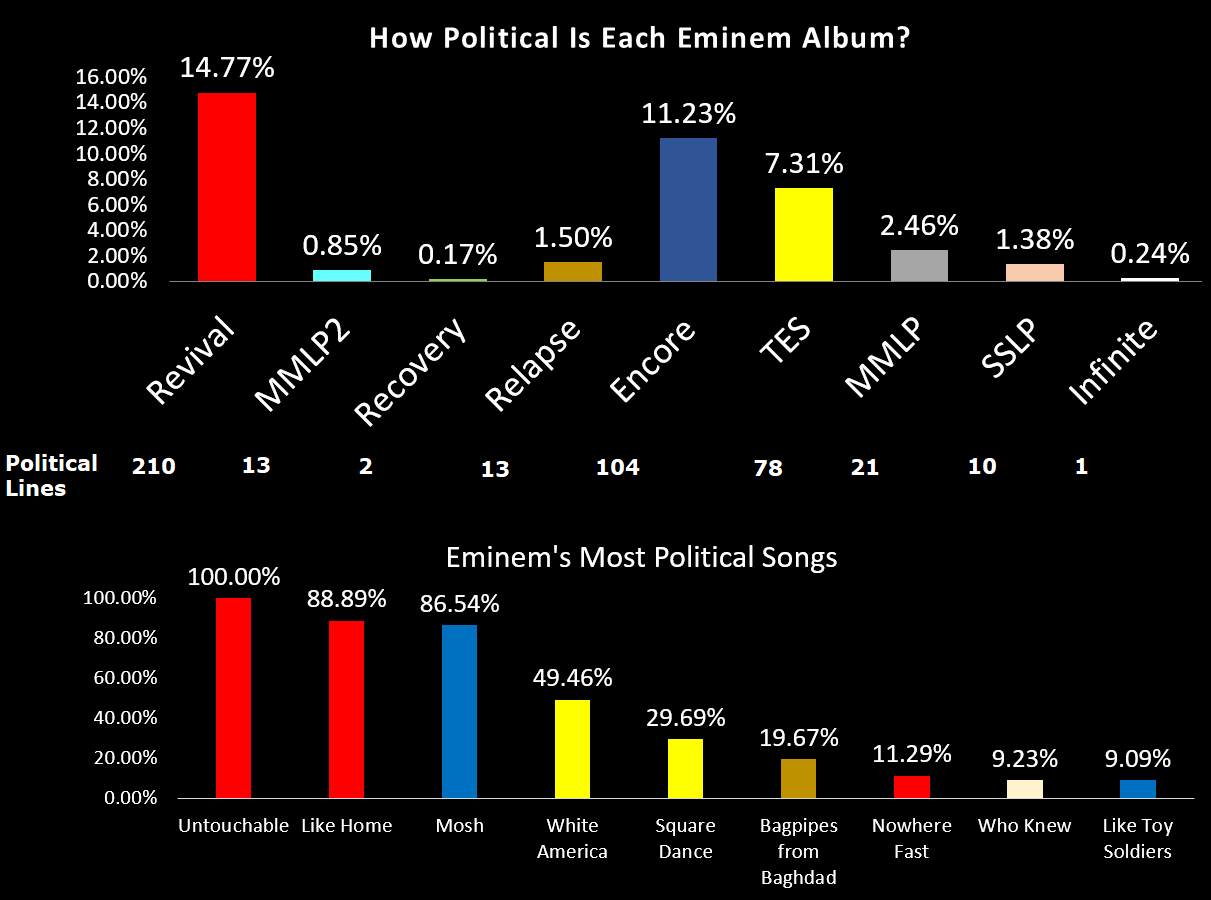 During the Bush administration in the early-mid 2000s, Eminem was passionate enough to lyrically take aim at the Government. In 2004 he was on the cover of Rolling Stone, saying: "[Bush] has been painted to be this hero, and he's got our troops over there dying for no reason... I think he started a mess... We got young people over there dyin', kids in their teens, early twenties that should have futures ahead of them. And for what?"

This led to some of his most charged political content. During "Mosh" he advocated revolution, highlighting the danger of brainwashing people from a young age via "pyschological warfare" and by trying to "trick us to thinkin' that we ain't loyal". In an interesting piece of foreshadowing, this is similar to how Colin Kapernick has been treated by certain groups of people after refusing to stand for the national anthem in 2017. Eminem would reference this in the BET Cypher from October 2016.

"White America" was a musing on the importance of his own race with regards to his success. He states "if I was black, I would have sold half",  and then uses the outro to criticise conservative politicians, notably Lynne Cheney and Tipper Gore. He didn't go as far as to tell certain political groups to stop listening to his music, as he would with the BET Cypher in 2017, but he wasn't being complimentary of those groups in any way, shape, or form.

Both "We As Americans" and "Campaign Speech" have featured violent political content. In 2004 he rapped:

I'd rather see the President {dead}It's never been said, but I set precedents

The "dead" was censored on all official releases. There were reports at the time that Eminem was being investigated by the Secret Service over the line, but if something came of it, it was behind closed doors.

That's an awfully hot coffee potShould I drop it on Donald Trump? Probably notBut that's all I got 'til I come up with a solid plot
Got a plan and now I gotta hatch it

These tracks were some of the most political of his career.

While one-off tracks exist that feature a large percentage of political content, it's a tiny amount when his entire discography is taken into account. 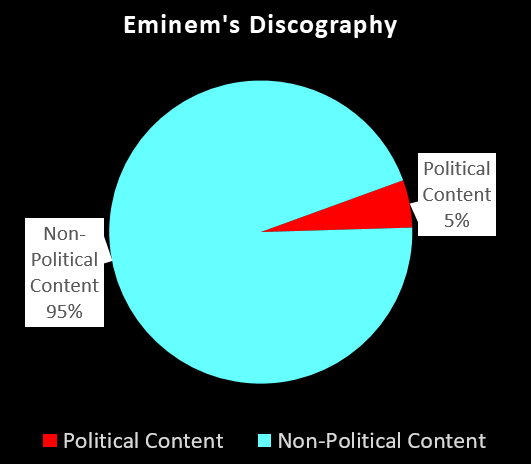 Should Revival have been more politically-based? Would it have made a difference to the quality of the project? Running a correlation analysis on the critical reception of each Eminem album vs. the political percentage shows there is no major relationship between critical reception and political content, and this can be dealt with on a qualitative level as well. Most agree The Eminem Show is in his top 3 albums, but Encore wasn't nearly of the same quality, and those are his two most politically-motivated records before Revival, so there doesn't appear to be a correlation between quality and political content.
at December 28, 2017
Email ThisBlogThis!Share to TwitterShare to FacebookShare to Pinterest
Newer Post Older Post Home