By The Numbers: Eminem Has Become a Pop-Rapper

When the tracklist for Eminem's 2017 album Revival came laden with 7 different pop guest artists, hot takes littered the internet. The sound and direction of Revival seemed at odds with his 2017 BET Cypher, in which he waged war against US president Donald Trump in a lyrical display that called back to the time when Eminem was often spoken of as one of the greatest rappers alive.

Now that the album has dropped, it appears Eminem is attempting the transition from rap purist to a rock/pop/rap hybrid that he was lyrically dismantling as recently as 2009 on Relapse's lead single "We Made You". What makes this transition more jarring is the direct correlation between waning critical review scores and the steady addition of pop music to his solo albums.

Eminem: "I don't feel like I ever set out to make a pop song, or a song that was gonna be some kind of crossover song or whatever."

As we'll see, the evidence points to Eminem setting out on this pop-star path as early as 2010's Recovery. 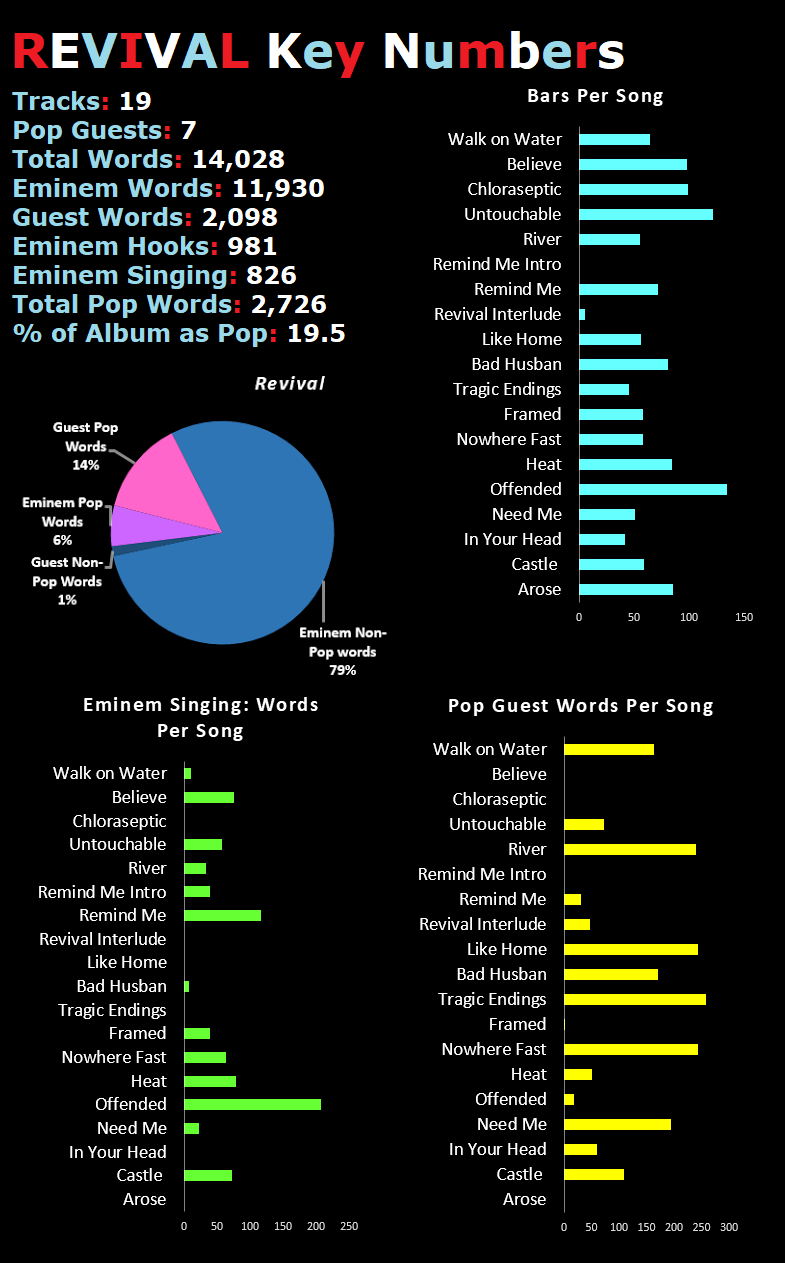 Eminem enlisted 7 pop stars to provide hooks on Revival. This is more than double the number he employed on Recovery, more than triple he used on MMLP2, and 7 times the amount he used on all 5 of his first major solo albums combined (SSLP, MMLP, The Eminem Show, Encore, Relapse).

Revival is the first Eminem album not to feature a verse from another rapper. Phresher turns up on "Chloroseptic" to provide a hook and a weird post-chorus duet with Em, but he doesn't spit a verse.

19.5% of Revival is pop, either through Eminem singing, or his popstar guests providing hooks, bridges, and verses.

It can be argued that Eminem's early commercial success elevated him to pop-rapper, but his stratospheric singles "My Name Is", "The Real Slim Shady" and "Without Me" were all caricatures of the pop landscape at the time. In 2013 he told Zane Lowe "My Name Is" was an "anti-pop song... it was my hello to the world but also my fuck you to the world". This attitude prevailed through his first 5 major label records, and it wasn't until 2010's Recovery that pop turned from a source of comedic satire to a source of content and a medium through which Eminem would channel his more uplifting messages.

Eminem's 3 albums this decade have been his most pop-laden, either through himself singing pop-focused hooks and bridges ("Not Afraid", "Seduction", "Stronger Than I Was") or via a revolving door of pop singers specialising in hooks (Pink, Skylar Grey, Beyonce, Rihanna etc).

This embrace of the pop sound has led to some of his lowest critical review scores. The early sentiment surrounding Revival seems to point to a critical hammering when the dust settles, more-so even than Relapse.

This graphic is more damning. Pop singers have provided 14% of the pop words on Revival, double that of the next highest (MMLP2 and Recovery), and 14x more than The Eminem Show and Slim Shady LP, albums regularly cited as classics in Eminem's catalogue.

No Guest Rap Verses on Revival

This is the first Eminem solo album not to feature a guest verse from another rapper. Phresher drops a hook, but that is it. There were hopes 2 Chainz might make an appearance, but those were scuppered when the tracklist was revealed. 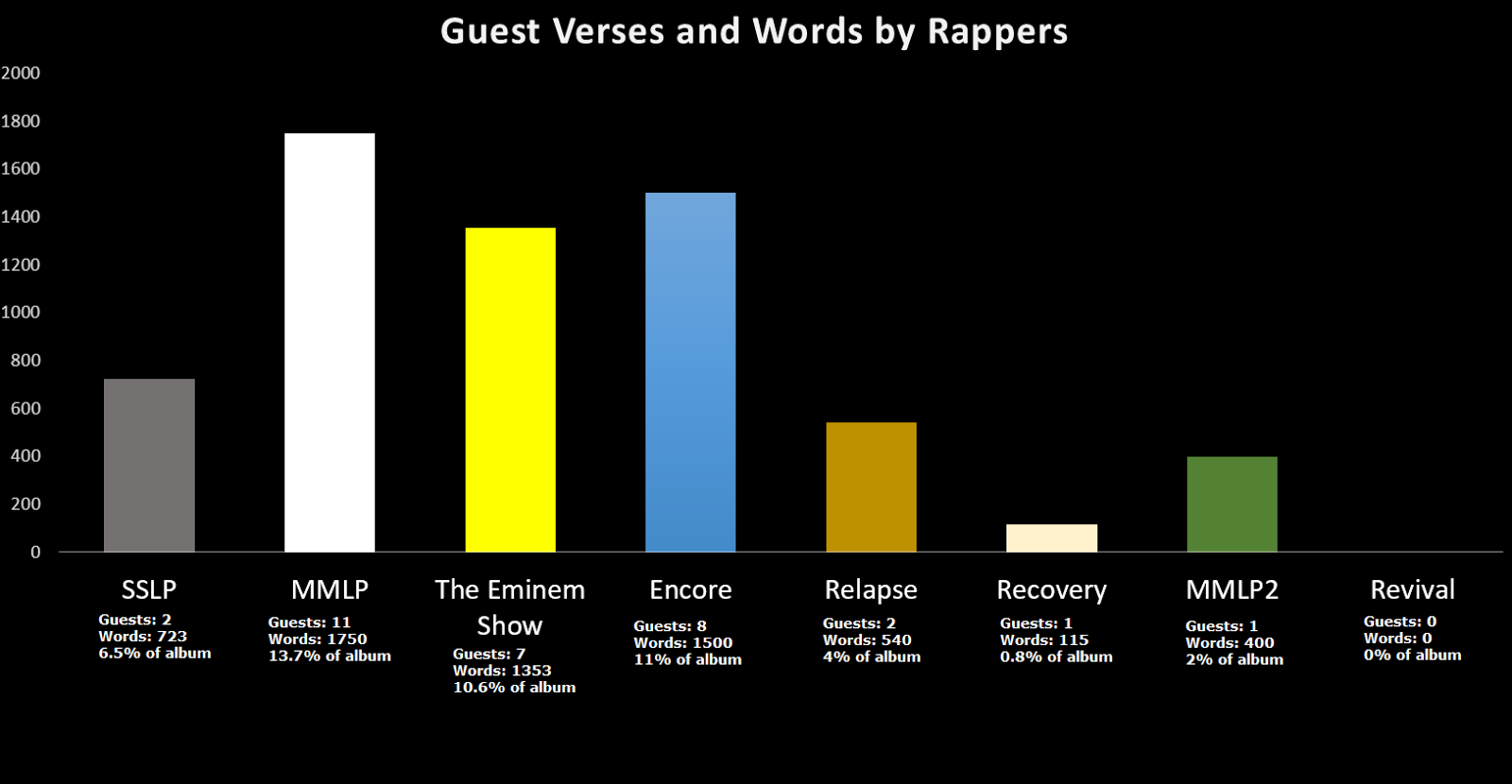 Eminem has slowly been isolating himself from the rap community since 2009's Relapse. His last 4 solo albums have had just 4 rappers providing guest verses.

Does Eminem still spit Bars though? 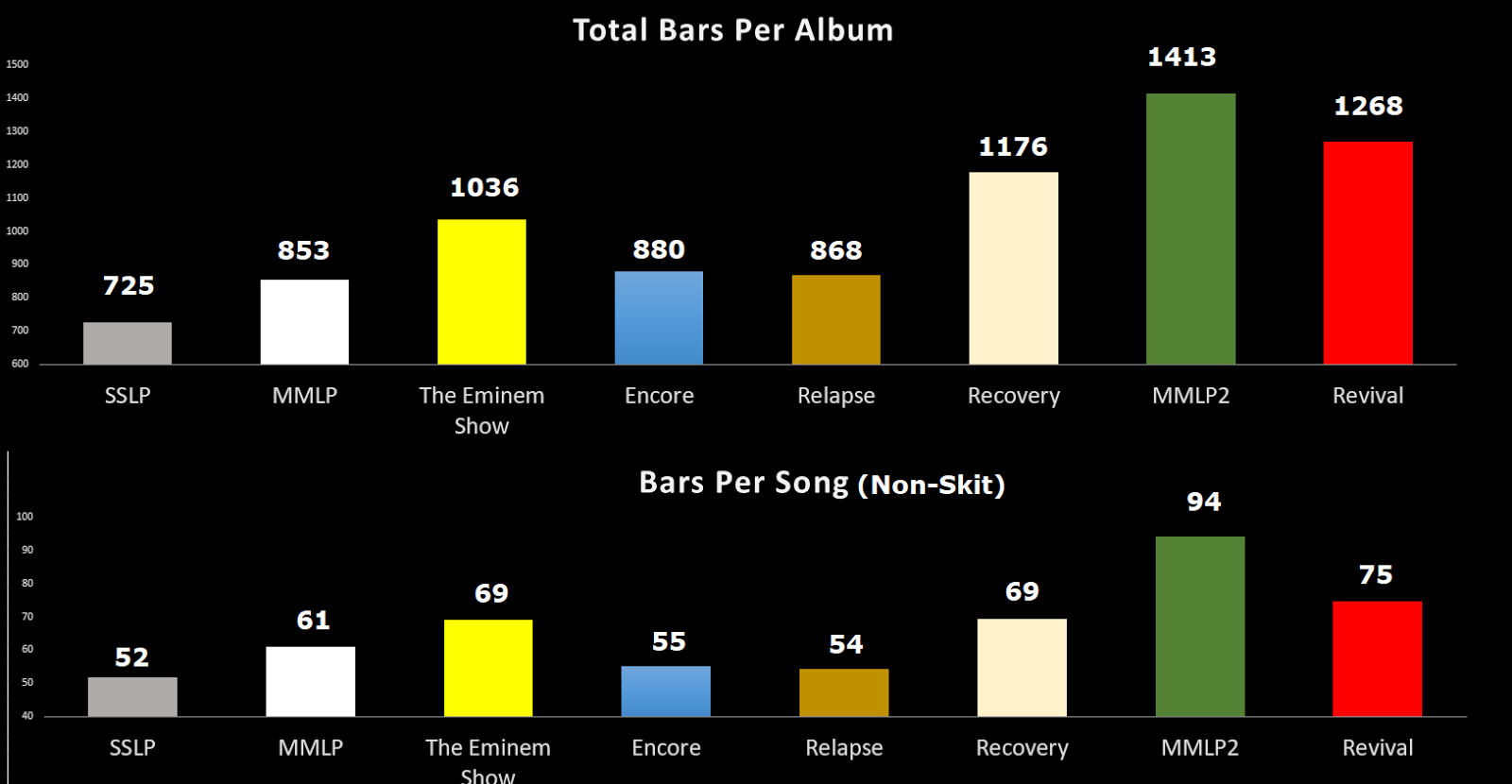 Fear not. Eminem still raps, and by eschewing guest verses from fellow emcees he has ensured that MMLP2 and Revival have been his most bar-laden records. I'll let you be the judge of whether that's good or bad.
at December 15, 2017
Email ThisBlogThis!Share to TwitterShare to FacebookShare to Pinterest
Newer Post Older Post Home